Each had a manager whose job it is to take care of her and manage her image.

These managers know what their client wants and needs.

So as I’m preparing to shoot, they whisper in my ear telling me what they expect.

I'm not annoyed; I know they’ve probably worked with photographers who are clueless on the importance or details of the process.

But isn’t everyone a star in her own life and work? Is the process any less important for them?

My work history makes me a better photographer.

My years creating ads and running an ad agency taught me what works and the kinds of images that build brands.

The many years spent doing fashion photography for ads, catalogs, and the media taught me how to work with people to get the looks we need.

Along with that, I developed an eye for detail. Which is almost as important as the expression on the person’s face and as important in a business headshot as it is in a fashion ad.

Most troubling details can be fixed.

Many photographers don’t seem to care about wardrobe or how it looks. Lumps in shoulders, coats that don’t close, ties that are loose, etc.

These things can all be fixed in Photoshop, and they should be. Your profile photo is the image you use to represent your brand. And in a larger sense, it becomes your personal and professional image. That’s why it’s so important.

Doing corporate headshots is more challenging than I thought.

When I was shooting fashion, each shoot was dramatically different from the others.

In fashion there were striking differences in models, make-up, hair, styling, wardrobe, the set, etc. But when I started shooting headshots, it looked like each shoot was about the same.

That was a misconception. The differences are there, but in a more subtle way.

Obstacles come up and must be removed or transformed. Maybe the lips make a weird shape during a smile, or the teeth are yellowish, etc.

I’ve learned how to fix just about any problem that arises. And if I encounter a new one, I’ll learn how to fix that as well.

How I Got Started

They hired me to do black-and-white headshots for a printed firm directory that everyone called “the facebook”, and this was many years before Facebook.

I shot many thousands of lawyers for more than 20 years and for several of their offices.

My portfolio at the time was all young women in dresses and swimsuits, not a single person in a business suit. I was surprised and lucky to get hired.

In those days most companies shot their top people for public relations articles in magazines and newspapers. When I ran an ad agency, I would send clients to a corporate photographer for pictures.

The internet changed all that. Today not only corporate officers but most of the key employees need shots for the firm and sometimes for LinkedIn and their own marketing.

Photographers of all kinds, thinking this was easy work, came to the field. Local wedding and portrait photographers, for example, announced that they now did business headshots “too”.

Some actually did a good job under favorable circumstances, but most never mastered the corporate/professional aesthetic, and they never even realized that it was a problem.

Once I shot the Chicago employees for a large Wall Street financial firm. The administrator asked if I had a background that matched the one used in NYC when their CEO was shot.

It was what is called a “mottled backdrop” – a blend of cloudy shapes of various colors painted over a single-colored, canvas background, maybe brown, blue, or gray.

I told her I had several. I used to paint them myself. But no mottled background would look like any other. So if they wanted a match, I would use a digital background I created to match that in the CEO’s picture. This is something I've done many times.

But then I told her that it wasn’t a good idea.  Photographers serious about the work haven’t used backgrounds like that in 20 years. The look resembles shots done in the J.C. Penney’s children’s portrait studio and not the aesthetic that modern companies would want to use.

Sadly some clients seem to think one photographer is as good as another when shooting headshots.

My idea in the beginning was to study what the best clients were using, what the best photographers were shooting, and try to get better from that starting point. 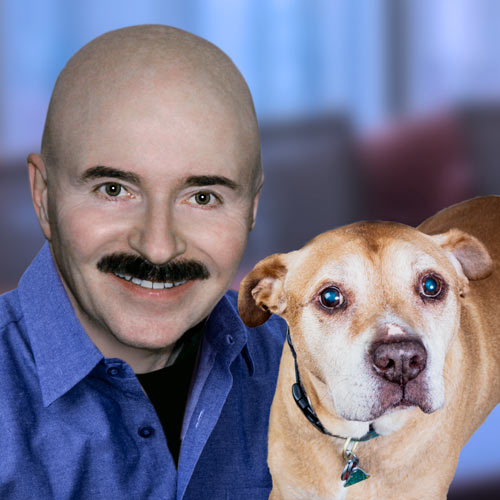 GET A GREAT PROFESSIONAL PORTRAIT

GET A GREAT PROFESSIONAL PORTRAIT